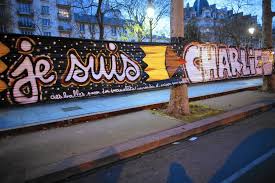 I try not to post anything too political or religious… but what’s happening in Paris is so horrific. I got this email on December 4th… Just a few weeks ago. It’s been circulating in the Jewish Community. Maybe I should have shared it…But I’m sharing it now. I know I have readers in France… Can you let me know more?

Once again, the real news in France is conveniently not being reported as it should. To give you an idea of what’s going on in France, where there are now between 5 and 6 million Muslims and about 600,000 Jews, here is an E-mail that comes from a Jew living in France … Please read!

“Will the world say nothing – again – as it did in Hitler’s time?” He writes: “I AM A JEW — therefore I am forwarding this to everyone on all my e-mail lists. I will not sit back and do nothing. Nowhere have the flames of anti-Semitism burned more furiously than in France.

1. In Lyon , a car was rammed into a synagogue and set on fire.
2. In Montpellier , the Jewish religious center was firebombed;
3. So were synagogues in Strasbourg and Marseilles
4. So was a Jewish school in Creteil – all recently.
5. A Jewish sports club in Toulouse was attacked with Molotov cocktails
6. and on the statue of Alfred Dreyfus, in Paris , the words ‘Dirty Jew’ were painted.
7. In Bondy, 15 men beat up members of a Jewish football team with sticks and metal bars.
8. The bus that takes Jewish children to school in Aubervilliers has been attacked three times in the last 14 months.
9. According to the Police, metropolitan Paris has seen 10 to 12 anti-Jewish incidents PER DAY in the past 30 days.
10. Walls in Jewish neighborhoods have been defaced with slogans proclaiming ‘Jews to the gas chambers’ and ‘Death to the Jews.’
11. A gunman opened fire on a kosher butcher’s shop (and, of course, the butcher) in Toulouse , France
12. A Jewish couple in their 20’s were beaten up by five men in Villeurbanne – France (the woman was pregnant).
13. A Jewish school was broken into and vandalized in Sarcelles , France .. This was just in the past week.

So I call on you, whether you are a fellow Jew, a friend, or merely a person with the capacity and desire to distinguish decency from depravity, to do – at least – one simple thing: Care enough to stay informed. Don’t ever let yourself become deluded into thinking that this is not your fight.

The number one bestselling book in France is….

‘September 11: The Frightening Fraud’ which argues that no plane ever hit the Pentagon!

Previous Post: Cannabis On a Plane! (I wrote this over 2 years ago… It made me laugh tonight… As I’m making travel plans!)
Next Post: Laugh Lines… Blogapy