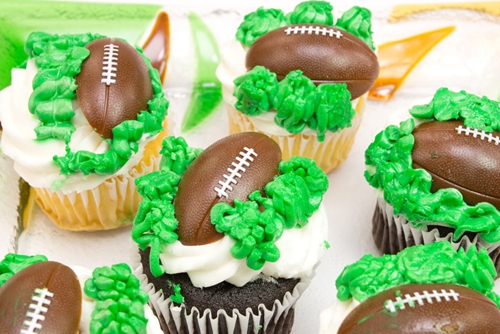 Thee Football Game… that’s what I have to call it. Because just “The” football game doesn’t do it justice.

I showed up to the “Boys Prison” on a freezing cold Saturday morning. As soon as I walked through the door… the guard met me and said “They just called down to see where you were?”

They were waiting for me…

They let me right in… WITH my purse… and enough cupcakes to feed… well… a whole football team! No search… no metal detector… doors were unlocked & locked as I passed through with ease… and unescorted. It was like being at a concert in the 80’s… when they put the tag around your neck… meaning go right backstage… no one will stop you!

I walked up to the field and hung with the coach, the guards and the head of the whole Connecticut prison system… (who just happened to be there)

I got 3 hugs… and all of them called me Miss.

I cheered the loudest when they ran onto the field… breaking through the banner!

I cheered like an embarrassing Mom… If it was my son playing… he would have already walked off the field. I was jumping up and down… Woot Wooting! In the freezing cold… with the armed guards! All of us…. cheering for those boys… It was amazing.

I asked the Head guy, “Why aren’t the other inmates up here watching the game?”

We talked for a while. I told him what an amazing place I thought his facility was.

I likened the prison to a cocoon. Morphing these young broken caterpillars… who made mistakes… and some of them… truly terrible ones. Into butterflies… getting up every morning at 6am, not fighting, working as a team… performing… and winning.

That’s what these 17 emerging butterflies… could show all the other incoming caterpillars.

If they work hard… dedicate and commit themselves to work as a team, work hard… set a goal… and then accomplish it! Holy Shit… right!

Guess what… he agreed! So, next season… there might be more than just me on the sidelines!