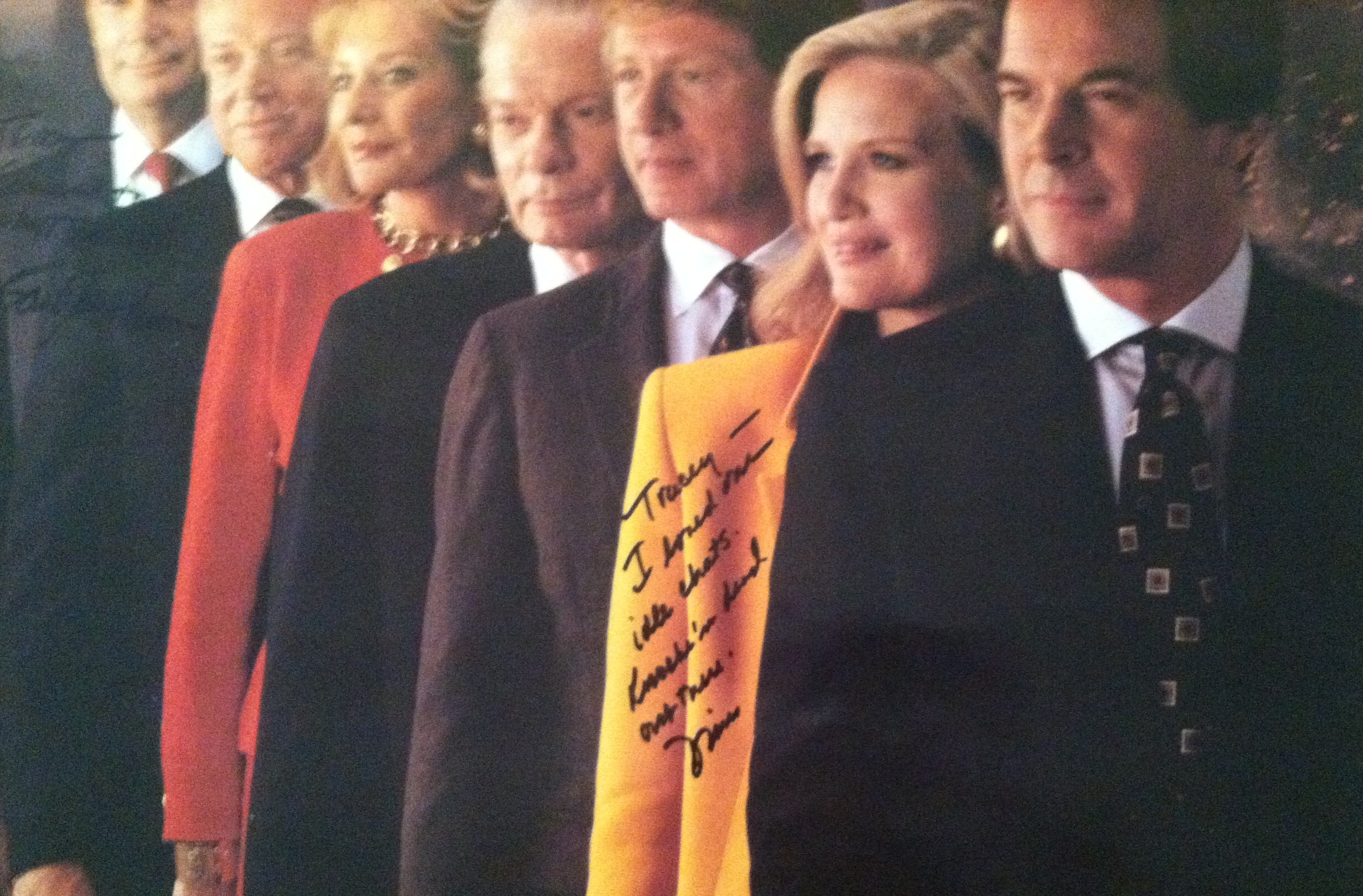 No… I’m just kidding. I think if I was sitting on her lap she wouldn’t remember me. Not that I wasn’t interesting then… I was just… well… young.

In my past Blogapies… I have talked about the fact that I wanted to be a Broadcast Journalist when I graduated college. Until I worked for ABC Network News in NYC.

Don’t get me wrong… I learned a lot. And the one I learned the most from was Diane Sawyer herself.

I found this old poster today in a cabinet I’m hoping to sell at an upcoming tag sale… I was very surprised to see that it had held up so well.

I opened it up and read what she wrote. “Tracey… I Loved Our Idle Chats.”

Those chats changed the course of my career… and my life.

Diane, Thank-you for being so honest with me when I was a young, stupid intern. One of the funniest memories… and maybe she’ll remember me now… is when we sat in her office for over an hour chatting one day. I wore an Ann Taylor green silk suit… the same one she had worn on air just a few days earlier.

Now, I had bought it and worn it before she did… but I always wondered if she thought i was a shit for wearing it to ‘hang out and chat’. Thank God 21 was the legal drinking age… I was still such an idiot around that time in life.

The last time I saw Diane was when she signed this poster. It was just a few minutes before she had to go on air… and was in that “prep mode”. I of course walked right past her assistants and said… “Hey Diane… I’m leaving and wanted you to sign my poster.” She said no like a thousand times… asking me to wait until the broadcast was over.

But I had to go… and I wasn’t leaving her office without it! She must have been spitting nails at me while she signed my damn poster… But I got it.

Ever since my CBS News piece aired… I’ve tried to reach out to her. To say hi when I’m in NYC. But… she hasn’t written back since.

But I still have my 20 year old poster, My ABC ID badge, A memo from my Secretary, saying Diane Sawyer called and her ext#… and a beautiful picture of Diane and me…in her office… in my Ann Taylor green silk  suit.

I might have overstepped my bounds then… but I still do it to this day.

I was on the phone with the CEO of Accelerate Brain Cancer Cure the other day. And I said that I wanted him to fly to Connecticut, to have dinner at my house, with me… and all my Doctors and Researcher friends at Yale Brain Tumor Center.

I’ll make Garlic Chicken and Fresh Strawberry Pavlova… and the Drs will get so much exposure… they won’t know what to do with themselves.

And Max… actually agreed to it. Date TBD.

Never be afraid of NO… it’s what we started with anyways!

So, Diane… Thanks for making me braver and bolder! Now I don’t wait to get invited to the party… I THROW THEM!